Interested in quality exhibits and programs in the fine arts outside Peoria? 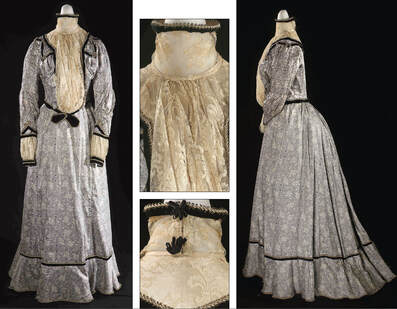 There is perhaps no more intimate connection to the people of the past than the clothing they left behind—garments that were once worn on a living, breathing person going about her daily business, garments that were soiled and washed and mended and altered; garments that expressed her aspirations and reflected her condition.
Fashioning Illinois, 1820-1900 is a celebration of nineteenth century Illinois clothing that explores both the personal experience of wearing and caring for clothing as well as the way that fashion reflected the changing roles and attitudes about women over the first 80 years of Illinois statehood.
Visitors to the exhibition will see stunning examples of historic costumes, textiles, and accessories from the Illinois State Museum’s Illinois Legacy Collection, as well as historic artifacts related to making, storing, washing, mending, and repurposing clothing. Interactive displays throughout the exhibition provide children and adults alike the opportunity to indulge their tactile senses, and a full lineup of related programming offers the opportunity for fun and learning.
more information

From the 1880s on, Chicago welcomed the “Father of Impressionism” with open arms. When Monet’s paintings first appeared alongside his contemporaries’ in a Chicago gallery in 1888, he was singled out for praise by the press. And when his works were shown in the city again as part of the last Inter-State Industrial Exposition in Chicago (also known as the “American Salon”) in 1890, they not only captured the eye of local collectors—they ignited a collective passion.
In 1891, Bertha and Potter Palmer acquired some 20 paintings by Monet—including several from the Stacks of Wheat series—a fraction of the 90 canvases they would come to own. That year, Martin A. Ryerson, who served as a trustee and eventual vice-president of the Art Institute, bought his first of many paintings by the artist. As president of the Board of Lady Managers for the 1893 World’s Columbian Exposition, Bertha oversaw the creation of the Woman’s Building. The international fair, which featured an exhibition of 129 works from American private collections, including four paintings by Monet, showcased a city still reimagining itself after the Great Fire of 1871 and one eager to embrace not only the technology but the aesthetics of modernity. And who had a more modern artistic vision than Monet?
Inspired by these influential tastemakers, private groups and collectors eagerly followed their lead. In 1895, the Union League Club of Chicago purchased Apple Trees in Blossom (1872), which was also shown at the Art Institute that year in the exhibition 20 Works by Claude Monet, the artist’s first solo show at a museum in the United States. In 1903, the Art Institute became the first American museum to purchase one of Monet’s paintings and in the decades that followed, the museum’s collection grew thanks to generous gifts from several donors, including Annie Coburn, former two-time Chicago Mayor Carter Harrison Jr., the Searle family, and others. In keeping with the theme of firsts, Monet and Chicago is the first exhibition to explore Chicago’s pioneering connection to the great Impressionist artist.
more information

With works spanning more than 2,000 years, Nubia: Treasures of Ancient Africa offers insights into the kingdoms that inhabited what is today the Sudanese Nile Valley. Although frequently overshadowed in the public imagination by its northern neighbor Egypt, ancient Nubia has a long and glorious past. There, a series of civilizations flourished for more than 6,000 years. Nubia’s location made it a strategic link between central and eastern Africa, western Asia, and the Mediterranean, but its history was often misinterpreted. Through a majestic display of art and objects, this exhibition offers new ways of understanding Nubia’s history and contemporary relevance.
The exhibition presents the Nubians’ artistic achievements, including magnificent jewelry, pottery, sculpture, metalwork, and more and showcases the collection of the Museum of Fine Arts, Boston. Through Nubian art, the exhibition examines concepts of power, representation, and cultural bias in the ancient world, in the early 20th century, and today.